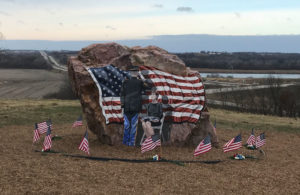 The east side of the Freedom Rock.

A massive “Freedom Rock” was dedicated at 8 a.m. this morning at the Iowa Veterans Cemetery near Van Meter. Ray Sorenson of Greenfield, who goes by the nickname Bubba, is the artist.

“Veterans Day and Memorial Day are every day to me. I’ve kind of made it my life’s work,” Sorenson said during a brief ceremony. “In fact, right after this I head to Franklin County to work on the 80th ‘Freedom Rock’ across this state.”

Sorenson paints a patriotic image on each rock and aims to have one in each of Iowa’s 99 counties as a tribute to veterans. The “Freedom Rock” at the Iowa Veterans Cemetery has the image of a widow at a soldier’s funeral receiving the American flag from an honor guard on the east side. The west side features a flag, with an eagle carrying the inscription: “All gave some. Some gave all.”

Sorenson has been able to mix the ashes of veterans in his paint on some of his ‘Freedom Rock’ projects.

“There’s even some ashes painted into this rock up here on this hill,” Sorenson said. 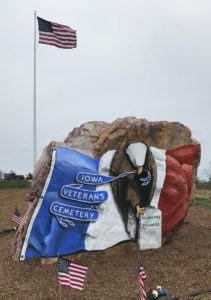 The west side of the Freedom Rock.

The rock sits at the summit of the cemetery. The granite came from a nearby quarry owned by Ron Mason, Sr.

“This was one of the largest boulders we’ve ever recovered from the quarry,” Mason said during the ceremony. “It’s 5700 pounds. It took a half a day to load it and a half a day to unload it.” 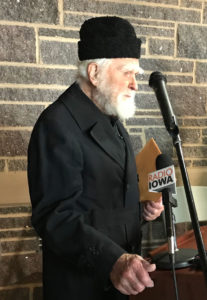 Mason served seven years in the U.S. Navy, from mid-1941 until mid-1948. He flew missions over the Atlantic Ocean in something like a seaplane, that could take off and land on the ocean surface.

“I was a flying boat pilot, looking for German submarines.” Mason told Radio Iowa during an interview.

The granite boulder Mason donated for the project is 12 feet in diameter, with fairly flat sides, which Mason said were good for mural painting.

“I think the rock is well placed. It overlooks the Raccoon River valley and you can see probably 20 or 30 miles. It shows I-80 going west. It makes a beautiful, beautiful view. It’s particularly interesting to me because I will be interned here. I would like to get out of my skin once I’m interned, so that I can take a look at it occasionally,” Mason said, laughing.

Mason will turn 100 in a couple of months. His wife is among the 2,900 who’ve been buried at the Iowa Veterans Cemetery. Construction began on the cemetery on Veterans Day in 2006. It was opened on July 3, 2008.