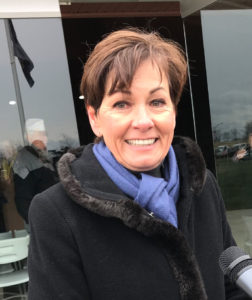 The administrators of state agencies soon will begin presenting their budget outlines for next year to Governor Kim Reynolds in a series of hearings.

The leaders of nine state agencies will make their cases to the governor this afternoon at the statehouse. Reynolds, a Republican, spent much of the summer and fall out on the campaign trail and won a four-year term in office a week ago today.

“It’s nice to be back in the office and start to catch up on some of that stuff,” Reynolds says of the dozens of state budget presentations ahead.

The next state budgeting year starts July 1, 2019. Reynolds will present a proposed outline for state spending to legislators in January. The governor says tax receipts appear steady and reserve accounts are full.

“It’s a much better place than we’ve been in for the last two legislative sessions and I’m looking forward to that,” Reynolds says.

Lawmakers made mid-year budget cuts in each of the past two years after state tax collections slipped below expectations.