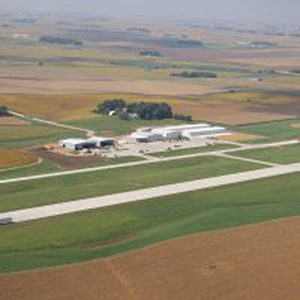 “The real backbone partnership is that betwen the cities of Orange City, Sioux Center and Sioux County,” he says. “…Our board is made up of representatives from each of those three entities.”

There are airports in Orange City and Sioux Center, but neither has the taxiway necessary for business jets.  Schiebout says the new airport hopefully will help keep corporate offices in the county.

“They’re businesses that have a national or even international footprint,” Schiebout says, “and so sometimes those kind of corporate offices could be attracted to more metropolitan areas.”

The pricetag for the new airport is $32 million. It has a terminal, lighting for approaching aircraft and a weather observation station. The grand opening is scheduled for tomorrow morning with a ceremony and ribbon cutting at 10:30. Lunch and self-guided tours will follow from 11:45 until 2 p.m.