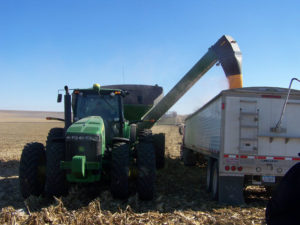 They called it a “harvest bee” as friends and neighbors brought their equipment to the fields of a Plymouth County farmer today suffered the loss of his son in a weekend plane crash.

Thirty-six-year old Patrick Kellen was one of four people to die when the plane crashed on the way to a hunting trip.  Marty Pippett helped organized the harvest bee for Kellen’s father Del. “Today we’re running with six 12-row combines, we’ve got six grains carts, and we’ve got 16 semis running grain back and forth,” Pippett says.

Pippett says it only took some phone calls to line up farmers to help out. “Obviously with the tragedy that occurred over the weekend — everybody wants to do what they can to help out the Kellen family and let them have the time that they need with their family,” Pippett says. “There was an outpouring of support from everyone in the farming community. We started making some phone 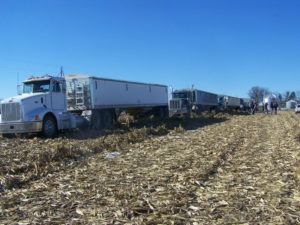 Semis lined up to haul grain.

calls yesterday, and without hesitation, everyone stepped up to the plate.”

He is not surprised by the response. “Just another example of how this community is pretty special and everybody will do what they can to help each other out,” Pippett says. The farmers all converged on a cornfield in the southeast area of Plymouth to harvest the remaining 600 acres of corn left in the fields. Pippett says the goal was to finish the harvest before the Kellen wake scheduled for Thursday and the funeral which is scheduled for Friday.