You are here: Home / Crime / Courts / Sheriff says number of dogs taken from Worth County breeder could top 200 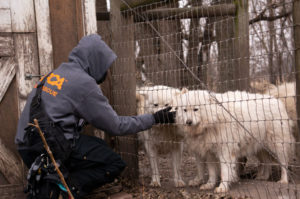 A member of the ASPCA works with the dogs.

Worth County Sheriff Dan Fank says his department, ASPCA, the Humane Society of North Iowa and other animal rescue organizations worked late into the day Monday removing dogs from a breeding operation near the Minnesota border.

Frank confirms his office tried to do something before it got to a point where the conditions required that they step in. “We’ve been trying to work with the breeder for probably about a year — trying to get her to relinquish and get the number under control — but we met with a lot of resistance,” according to Fank.

He is not yet identifying the breeder and says they have not yet filed any charges as they’ve been busy working in the cold to take care of the dogs and collect evidence. “Everything is still pending at this point,” Fank says.

The dogs are all Samoyeds, and he says crowded conditions and state of the animals is something he has not seen before. 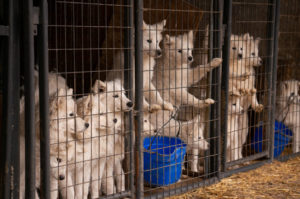 Puppies look out of their cages at the Worth County breeding facility.

He says it is a first for his department and that is why they called in the ASPCA to be sure the animals are all handled properly. Fank says the one lesson this should teach people is to talk with your local law enforcement if you see something like this.

“So many times people just don’t want to get involved and in this case I think we are going to be up over 200 animals we’ve taken off today — and they needed the help — and now we are getting the help to them,” Fank explains. ” It’s just important that if you see something like this — report it.”

The ASPCA and other animal rescue organizations took the animals from the facility to be cleaned up and fed.