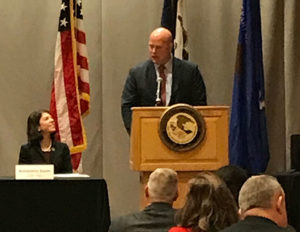 Acting U.S. Attorney General Matt Whitaker was back in his home state of Iowa this morning, speaking at a summit in Des Moines focused on prosecuting scammers who prey on the elderly.

“Iowa has shaped my values,” Whitaker said. “One of those Iowa values is that we respect our elders.”

Whitaker told the audience of prosecutors and investigators that American seniors will lose $3 trillion this year in some kind of fraud scheme.

“My own mother in Ankeny, Iowa, has received calls that were allegedly from my oldest son asking for help to get out of jail,” Whitaker said. “We all know these happen and it’s heartbreaking.”

These scams even rattle the confidence of seniors who don’t get swindled, according to Whitaker.

Whitaker announced the Department of Justice is setting aside nearly $18 million to help seniors who did fall victim to a scam. The money may be used to pay legal bills or even rent if the victim has lost their home to fraud. In addition, Whitaker said the federal government will beef up training for U.S. attorneys in how to document and prosecute fraud cases. A particular focus will be on prosecuting Americans who serve as so-called “money mules” and funnel stolen funds to scammers in another country.

Whitaker announced that since October 1, federal investigators have identified more than 700 “money mules” who were either unknowingly caught up a scheme or were co-conspirators in the fraud.

This was Whitaker’s first public speech in Iowa since President Trump appointed him a week ago to lead the U.S. Department of Justice.

Whitaker did not take questions from the audience or reporters. He left the stage, headed for a meeting with the U.S. Attorney for the Southern District of Iowa. Whitker joked during that meeting with local and federal law enforcement officials that “there has been a change or two” in the Department of Justice.

Whitaker’s appointment as acting attorney general has sparked controversy. 1866 was the last time a person was appointed acting attorney general without being confirmed by the U.S. Senate. Critics point to comments Whitaker’s made in the past, questioning the special counsel’s investigation of Russian interference in the 2016 election. Several Democrats in congress have called on Whitaker to remove himself from direct oversight of the special counsel’s investigation.