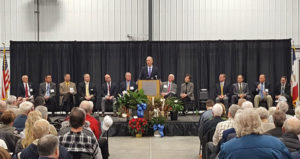 The chairman, president and CEO of Boeing was in northwest Iowa Wednesday for the grand opening of the Sioux County Regional Airport. Dennis Muilenburg is a native of Sioux Center.

Muilenburg indicated about 40,000 Iowa jobs are either directly or indirectly connected to Boeing.

“Today, we have 35 companies in our supply chain that are based here in the state of Iowa. We have one that’s very nearby in Orange City here, Aim Aerospace,” Muilenburg said. “They build advanced, lightweight materials for our commercial airplanes.”

Parts from Aim Aerospace are using in Boeing’s 787 Dreamliner. Muilenburg says Boeing’s new, even larger twin-engine jet that’s in development will include parts from the Orange City business. According to Muilenburg, Boeing contributes $1.2 billion to the state’s economy annually. Muilenburg flew in and out of the new Sioux County Regional Airport near Maurice in his business jet.