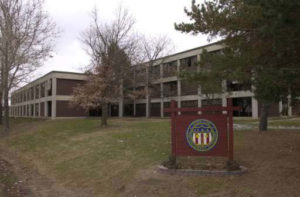 Around 70 people were sent to hospitals this morning after a carbon monoxide leak at the Iowa Law Enforcement Academy in Johnston.

Judy Bradshaw, the academy’s director, says a security officer called 911 around six this morning after noticing an odor of gas in the dormitory. She then woke everyone up and got them outside.

“By the time the fire department arrived, everyone was out of the building,” Bradshaw said. “Our employee did exactly what she should have done, responded very quickly, and we believe everyone was out within four minutes.” Bradshaw does not believe anyone is seriously injured. There were 81 students in the dorm at the time. Officials initially reported 56 were taken to area hospitals.

“We’re erring on the side of safety for our students, so we’re encouraging them to get to the hospital and be properly evaluated,” Bradshaw said at a 10 a.m. news conference. There was not a carbon monoxide alarm system in the dorm, according to Bradshaw. Some students suffered headaches and nausea and were found to have elevated levels of carbon monoxide in the blood. The cause of the gas leak is under investigation.

There are currently 97 students from around the state attending the Iowa Law Enforcement Academy. They are due to graduate in December. The academy’s building in Johnston is over 50 years old. The Iowa Legislature last year approved $12 million for construction of a new facility and the demolition of the current building.

“So, we are beginning the discussion of what our remodeled building will look like…you know, it can’t happen soon enough,” Bradshaw said. Mold was found in the building several years ago. Bradshaw said 11 students who were not in the building last night were staying elsewhere because of a burst water pipe on Tuesday that flooded part of the dorms.