You are here: Home / Military / Sioux City residents head to Maryland for christening of namesake ship 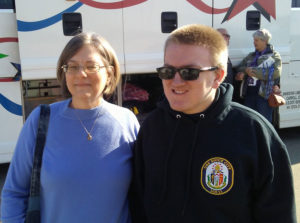 Around 50 people boarded a bus this afternoon in Sioux City for a 1,200-mile long trip to Annapolis, Maryland to witness the commissioning of the U.S.S. Sioux City.

The ceremony at the U.S. Naval Academy is scheduled for Saturday morning. Kim Huffman is making the trip with her son. “It’s a once-in-a-lifetime opportunity and the experiences are just phenomenal,” Huffman said. “I’ve been to West Point and to the Air Force Academy, so this will be my third one, my final one. There’s just some special and magical about being on a military academy.”

The group from Sioux City will get a tour of the nearly 400-foot-long littoral combat ship and attend several other events. Following the commissioning ceremony, the U.S.S. Sioux City will sail to its home base in Mayport, Florida. A crew of nearly 100 sailors will spend time training on the ship before its deployed for close-to-shore combat and security missions.