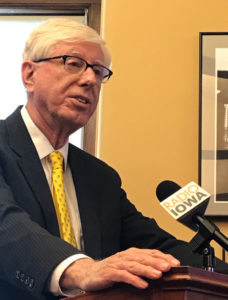 Attorney General Tom Miller says the budget for the Iowa Department of Justice has reached a “perilous” point.

Miller says there’s not enough money to cover the costs of working with county attorneys on criminal cases, working to uphold criminal convictions that are appealed and representing the state when it’s sued in civil court.

The situation, Miller says, has been caused by a series of budget cuts over a long period of time.

“Earlier this year we really had a crisis or a semi-crisis in representing the state in civil litigation. A whole sort of ‘perfect storm’ came at us,” Miller says. “I was extremely concerned and we worked through that, at least temporarily, but we’re just teetering on what the citizens of Iowa want us to do and expect us to do.”

Miller says “to avert total disaster” over the past two years, lawmakers gave him authority to use payments from legal settlements paid to the state by companies accused of bilking Iowa consumers. Miller says that fund can’t be tapped forever. He’s asking the governor and legislators for a $500,000 boost for the current state budgeting year and a $1 million increase in his agency’s budget for the following fiscal year.

According to a spokesman for the attorney general, the budget for the Department of Justice is 26 percent lower this year than it was three years ago.

This past spring, a key Republican lawmaker threatened to cut Miller’s budget by 10 percent. Representative Gary Worthan, a Republican from Storm Lake, accused Miller of “blatant partisanship” in joining lawsuits challenging Trump Administration policies.  Lawmakers, however, would up approving a budget of $7.4 million for the Department of Justice.

Miller, a Democrat, was just reelected to a 10th term in office last week. Republicans did not nominate a candidate for attorney general in 2018.

(This story was updated at 8:40 a.m. with additional information)