You are here: Home / News / Fees to fish, hunt trap in Iowa to increase 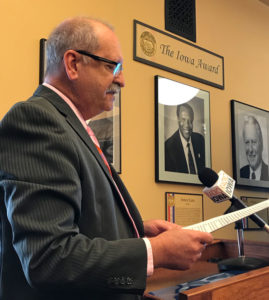 The fees for hunting, fishing and trapping licenses in Iowa will soon increase. A legislative committee has given final approval to the license fee increases, which were proposed by the Iowa Department of Natural Resources staff.

“Generally speaking, it’s about a 17 percent in those fees, so it’s a modest increase that is certainly going to cover some of our critical needs we have within the wildlife bureau, the fisheries bureau and also our conservation officers,” says Bruce Trautman, the acting director of the Department of Natural Resources.

It’s been 15 years since the state license fee for fishing was raised, as Republican lawmakers have vowed not to raise state taxes or fees, so Iowa legislators recently handed over authority to DNR staff to set hunting, fishing and trapping license fees.

The fees go into the state’s Fish and Wildlife Fund and are used on staff salaries and to do things like improve wildlife habitat and run the state’s fish hatcheries. Trautman says the new fees won’t take effect until next year.

“If we don’t have any reductions in the number of licenses — when you raise something, you take a bit of a risk (and) there might be a few folks dropping out — we’re anticipating about a $4.5 million increase,” Trautman says.

There’s been a growing reliance on fees to run the DNR. The amount of general state tax dollars budgeted for the agency is less than half of what it was a decade ago. Sporting groups lobbied for the increase in hunting, fishing and trapping license fees for several years.