You are here: Home / News / Cold weather on the way with snow forecast in northern Iowa 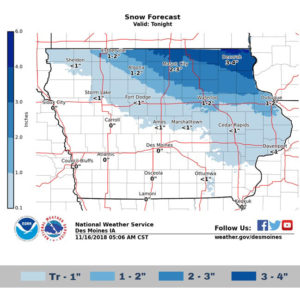 There’s still more than a month of fall left, but it’s going to start looking and feeling a lot more like winter later today as a cold front glides over Iowa.

Meteorologist Craig Cogil, at the National Weather Service bureau in Johnston, says the rain will change to snow late this afternoon and into this evening. “Primarily over about the northeast third of Iowa is where we’re going to see the snow,” Cogil says. “The heaviest snow will be up in the northeastern corner, maybe around three to four inches up by Decorah and Waukon is what we’re looking at right now. Lesser amounts as you head further south, maybe an inch or two near Waterloo and Dubuque.”

Many motorists haven’t gotten used to needing their winter driving skills yet and they’ll have to be fast learners. Cogil says, “For those starting off their weekend, they certainly need to be aware that if they’re heading north through northern Iowa and into southern Minnesota, they’re going to see some moderate snowfall later on today and especially overnight tonight.”

Next week is one of the busiest travel weeks of the year and Cogil says it appears the weather should cooperate. “Once we get through this weekend, which will be quite a bit below normal for temperatures, as we head into Thanksgiving week, it really looks like little threat of precipitation and moderating temperatures with reading up towards 50-degrees or so by Thanksgiving,” he says.

Winter arrives, at least on the calendar, December 21st. Keep up to date on the forecast at weather.gov.