You are here: Home / News / Grassley opts to lead Finance, not Judiciary Committee in 2019 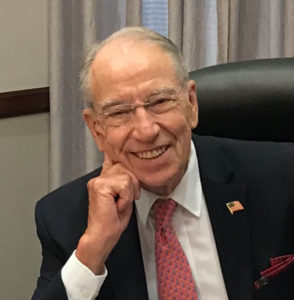 Senator Chuck Grassley is giving up the gavel in one U.S. Senate committee, planning to lead another panel that deals with tax and trade policy.

Grassley has been chairman of the Senate Judiciary Committee since 2015. Grassley announced today he wants to lead the Senate Finance Committee when congress convenes in 2019. The move is likely to be approved by Grassley’s GOP colleagues.

The Finance Committee has jurisdiction over Medicare and Medicaid, plus Grassley notes it oversees U.S. trade policy. That means it would be the first senate committee to consider any trade deals.

Grassley served a four-year stint as chairman of the Senate Finance Committee before, leaving the post in January of 2007 when Democrats took control of the Senate. Grassley is now the longest-serving Republican in the senate.