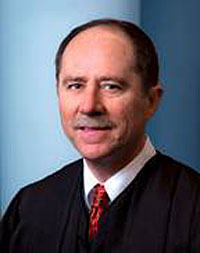 Justice Daryl Hecht of Sloan, who has been receiving treatment for melanoma in Sioux City and at the Mayo Clinic in Rochester, Minnesota, announced he will resign from the court on December 13th. Hecht had returned in September to hear oral arguments after being off since March — but was unable to hear arguments this week due to the side effects of the treatment.

A statement form the court system says Hecht discussed the issue with his family and determined it was essential for him to commit all of his energy to battling the disease. Hecht is a Lytton native who practiced law in Sioux City for twenty-two years before his appointment to the court of appeals in 1999 where he served until his appointment to the supreme court in 2006. Hecht is married with two daughters and three grandchildren.