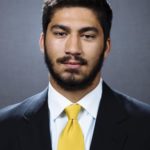 Iowa sophomore defensive end A.J. Epenesa has been named Big Ten Conference Co-Defensive Player of the Week following Iowa’s 63-0 win at Illinois. The announcement was made Monday by the Big Ten office.

The honor marks the second weekly honor for Epenesa, who was also recognized by the Big Ten for his play in Iowa’s win over Iowa State. The native of Glen Carbon, Illinois, recorded a career-best eight tackles at Illinois, including five solo stops and three assists.

Epenesa caused an Illinois fumble in the second quarter and returned the ball 19 yards for his first career touchdown. On Illinois’ next possession, he registered a sack on first down before blocking the Illinois punt three plays later. Teammate Nick Niemann recovered the blocked punt and Iowa scored on the very next play to take a 28-0 advantage.