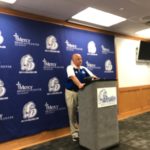 Drake will play at Iowa State December first to complete the 2018 football season. The Bulldogs and Cyclones kickoff at 11 a.m. at MidAmerican Energy Field at Jack Trice Stadium in what will be the first meeting between the two programs since 1985.

The Cyclones will be Drake’s 11th opponent of the season after both teams’ Sept. 1 season openers were canceled due to severe weather.

“Our team is incredibly excited to have another opportunity to play Drake Football together this season,” said Drake head coach Rick Fox. “Since the cancellation of our season opener, we felt that our team deserved an additional opportunity to play and are thrilled to have that chance. To do so versus an opponent such as Iowa State, with whom our football history dates back to 1898, is an opportunity for which we are grateful.”

When Iowa State’s season opener against South Dakota State was cancelled due to weather, ISU athletic director Jamie Pollard lined up Incarnate Word to be the replacement opponent.

The Cardinals secured an at-large berth in the FCS playoffs Sunday afternoon. UIW will now focus on its playoff opportunities – beginning with a first-round game at Montana State Saturday – and not play the Cyclones as planned.