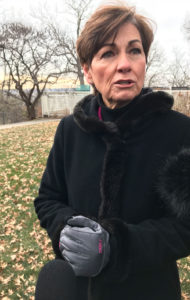 Republican Governor Kim Reynolds is planning to call on Iowa lawmakers to pass a series of criminal justice reforms — and a new path for restoring voting rights to an estimated 52,000 Iowa felons may be among her proposals.

“We’re going to have a conversation and talk about that,” Reynolds said. “…I want that to be a part of what we’re looking at next year.”

Iowa, Florida and Kentucky have been the only states to permanently bar felons from voting once their sentences have been completed, unless the governor acts to restore voting rights to an individual applicant. Earlier this month voters in Florida passed a referendum to override that policy, restoring voting rights to about one million felons.

“That’s why we’re going to take a look at it,” Reynolds told reporters.

In addition, a legislative advisory board last week recommended that Iowa’s current policy on felon voting rights be abandoned. Reynolds has continued the process set up by her predecessor, Terry Branstad, that requires felons to apply to the governor to have their voting rights restored. In the 18 months Reynolds has been governor, she’s granted that request to 88 felons.

“I was at my grandson’s basketball game…this weekend, being a grandma and I had a gentleman walk up to me and he had had his rights restored,” Reynolds said. “And he said: ‘Not only did I get a letter, but your team personally reached to me with a phone call to make sure that I knew that my rights had been restored.’ And he said: ‘I can’t even begin to tell you the dignity that I felt because I had gotten my life back, to be able to go in and vote.'”

Reynolds told reporters her staff worked to make sure all the applications for voting rights restoration were processed before Election Day.

In 2005, Governor Tom Vilsack issued an executive order the automatically restored voting rights to felons who had been released from prison and completed their parole, but in 2011 Governor Terry Branstad rescinded that, reverting to the voting rights restrictions for felons he had in force during his previous 16 years in office.