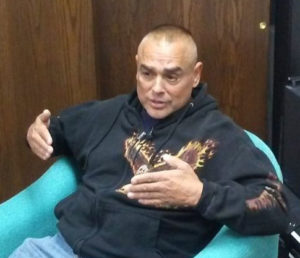 A northwest Iowa man has returned home from the West Coast, where he tried to save his mother’s home from wildfires that destroyed much of the town of Paradise, California.

Andrew Duran of Sioux City is a retired carpenter who had been working on his mother’s home in the days before the fires swept through the area. He stayed behind as his mother and two brothers fled the approaching flames.

Duran says he used a hose to “drench” the outside of their homes. “I just kept watering around the house, under the car port and everything, just trying to get it as wet as I could,” Duran said. “About 45 minutes later, I saw the house across the street go up (in flames). Then, the next door neighbor’s house went up.”

Duran quickly found himself fighting a losing battle and realized he was also in danger of being trapped. He shot and narrated a cell phone video of the homes going up in flames around him as he made his way towards nearby firefighters.

“There’s my mom’s house, going up right now. Sorry, mom,” Duran says in the video. Looking back, Duran said he was focused on saving his mother’s home and not worried about his own safety at the time.

“I didn’t have time to think about me,” Duran said. “My number one concern was not to let my mother’s home burn…she’s not going to be homeless.”

Duran’s mother and other family members made it safely to a nearby Wal-Mart that was transformed into a make-shift “refugee site.” They are currently staying with other relatives in California and trying to decide if they’ll eventually rebuild or move elsewhere.