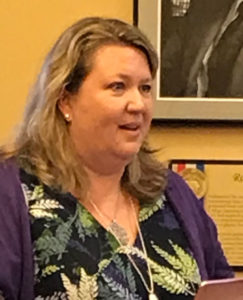 The director of the Iowa Department of Revenue says she’s living through a thrilling, “once in a lifetime” experience.

An exuberant Courtney Kay-Decker stood in the governor’s office Monday morning to deliver a briefing.

“I love ‘Hamilton,’ so every now and then I feel like I’m going to break into song,” Kay-Decker said, mentioning the song featuring two sisters singing: “Look around, look around. How lucky we are to be alive right now.”

Kay-Decker uses the word “fun” to describe the federal tax changes approved nearly a year ago and the state tax changes approved in the spring. In June, the U.S. Supreme Court ruled states can force online retailers to collect sales taxes. Iowa’s law on that subject goes into effect January 1.

“It is an exciting time to be in taxes,” Kay-Decker said, emphasizing her point by smacking her hand on the lectern. “If you’re a tax nerd, this is good stuff.”

The stuff started last December 22, when Republicans in congress passed their tax plan.

“It’s so fun! You know this is stuff that we don’t see very often. You know you see bits and pieces of it come along. You don’t see major reform like that very often in the tax world, so we were very excited to see that happen and to start thinking about what that means for Iowa,” Kay-Decker said.

Joe Bolkcom of Iowa City has been the top-ranking Democrat on the Iowa Senate Ways and Means Committee and he has a different opinion on the subject.

“It would be really fun if the Department of Revenue would send out refunds to Iowans in a timely manner this year,” Bolkcom said.

“We already have the standard in our law from tax reform to allow us to begin collecting on January 1st,” Kay-Decker said.

Kay-Decker indicated she and her staff at the Iowa Department of Revenue have spent months pouring over the details of these tax law changes.

“We have updated over 138 forms, seven brand new forms for this year,” Kay-Decker said. “Through that process, we’ve thought: ‘How do we make those forms better, easier for our taxpayers to understand?'”

“What we have historically done is talk to ourselves and we use funny ‘tax people’ words and the regular person in Iowa isn’t as excied about this stuff as we are,” Kay-Decker said. “I mean, we don’t get it, but we do in the sense that we realize we need to be better at communicating.”

And, for the first time in a decade, the withholding calculator tool on the agency’s website has been updated as well.