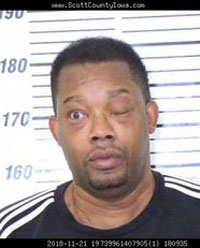 A 51-year-old Davenport man is under arrest, charged with seven counts of insurance fraud.

He’s accused of submitting several false insurance claims to different insurance companies. He’s being held in the Scott County Jail on a $25,000 bond.

A warrant was issued for Edwards in early October, but he wasn’t arrested until this morning.