You are here: Home / News / State Auditor-elect says there’s no real playbook for his transition into office 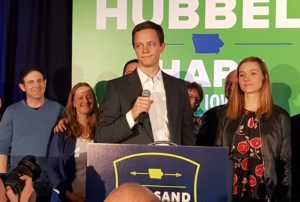 The only challenger to defeat a statewide elected official this year says it’s a rare situation and there are no guidelines for this transition period before he takes his new post. Thirty-six-year-old Rob Sand will be sworn in as State Auditor in early January.

“It’s incredibly unusual for a down-ballot, statewide challenger to beat an incumbent,” Sand said during an interview with Radio Iowa. “In fact, in my lifetime it has happened once, so there’s no real playbook.”

That was eight years ago, when a Republican beat a Democrat who was serving as Iowa’s secretary of state. Sand, a Democrat, defeated Republican State Auditor Mary Mosiman. Sand hopes to be briefed on office operations and meet with the auditor’s staff before the end of the year.

“I don’t anticipate a large number of staffing changes,” Sand said today. “A small number certainly is possible, but most of the people there are career public servants. They’re hard workers. They’re working the taxpayers and the people of Iowa.”

Sand raised more than $400,000 for his race. That’s more money than any other candidate for state auditor has ever raised — including state auditors of the past and present.

“As I was breaking records fundraising for the state auditor’s office, I was talking about how stupid it is that fundraising makes such a huge difference in our political system,” Sand said. “We’ve got to find a way to fix that, but until we find a way to fix that, I’m going to do what I can to make sure that people are able to hear my message and, for people to hear my message, I’ve got to push it out to them through paid media.”

One of Sand’s television commercial was unusual on Iowa’ political scene. It used humor and featured Sand’s wife complaining about her husband’s frugality.

“I heard time and time again that people wanted to vote for me based on the ad that my wife did,” Sand said. “A lot of people are tired of the constant negativity surrounding politics. I think people are happy to have someone who can look at an office and take the business of governing seriously, but at the same time have somebody who’s willing to have a little fun with it, too.”

Sand is an attorney who left his job as an assistant attorney general for the State of Iowa to run for state auditor. He prosecuted financial crimes, like Eddie Tipton’s scheme to rig lottery jackpots. Sand finished four points ahead of State Auditor Mary Mosiman in this months election — with 51% of the vote compared to 47% for Mosiman.