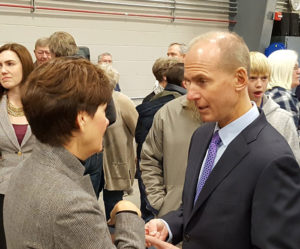 The chairman, president and CEO of Boeing is a northwest Iowa native. Dennis Muilenburg grew up on a farm near Sioux Center. He was back in the area last week for the grand opening of the new Sioux County Regional Airport.

“I had an opportunity to go off to Iowa State to pursue my engineering degree and as a junior…as I was getting my aerospace engineering degree I got a call from Boegin to do a summer internship in Seattle, so I loaded up my 1982 Monte Carlo and I drove from Sioux Center to Seattle,” Muilenburg said. “It was the first time I saw the Rocky Mountains.”

When Muilenburg got to Seattle, he saw the Pacific Ocean for the first time. Boeing hired Muilenburg right after he graduated from ISU. He’s been with the company for 33 years. Boeing is the world’s largest builder of commercial airplanes. Muilenburg is leading Boeing into the space race, building a rocket that will take humans to Mars.

“It’s a program called the ‘Space Launch System’ that we’re doing jointly with NASA, a big space priority for our country,” Muilenburg said. “That rocket is about 38 stories tall. It has a thrust that’s about 50 percent greater than the Saturn 5 rocket that took the Apollo astronauts to the moon and we have the first test launch of that next year.”

The rocket will take astronauts back to the moon first, according to Muilenburg.

“We’re going to set up a permanent base on the moon,” Muilenburg said. “We’re going set up a gateway orbit around the moon and that will be the launch point to go to Mars and the first person who sets foot on Mars is going to get there on this Boeing-made rocket.”

Muilenburg has been Boeing’s CEO since the middle of 2015. A week ago, Boeing announced a $6 million donation to Iowa State University. Most of the money will go toward construction of a new Student Innovation Center on the Ames campus where Muilenberg was a student in the 1980s.