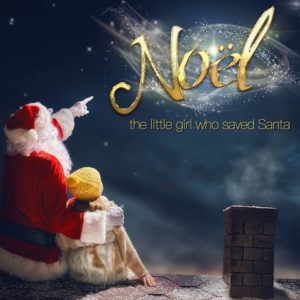 A Holiday musical born in Ireland, but produced in Iowa, will be making three stops in the state as the show crosses the country in the weeks before Christmas. Author Eoin Colfer, who achieved international acclaim for his “Artemis Fowl” series of children’s books, is the writer of NOËL – The Musical.

Colfer says NOËL was inspired by his travels around the world and the growing number of homeless people he saw in major cities. “It occurred to me that even though Christmas is a very happy time, it’s probably not so happy if you’re living in a park,” Colfer said. “So, I wanted to write a story that featured these people in the park but also that was infused with the hope that things could get better, because that’s what Christmas is all about.”

NOËL is set in modern day London and tells the story of a girl (Noël) who befriends a group of homeless people while searching for her mother. Steve Peters, founder and president of Ames-based VenuWorks, is the musical’s co-executive producer.

“We mounted the show two years ago at the National Opera House of Ireland as a concert work and we sold-out a week of performances there, so we knew we really had something,” Peters said. Colfer and Irish composer Liam Bates expanded the show for its first-ever North American tour.

Michael Londra, an Ireland native who’s lived in Ames for the past 20 years, co-produced NOËL – The Musical. “We thought it was perfect to take the show from Ireland and begin its new life here in the Midwest,” Londra said. “There’s something special about that. It connects the two countries and particularly with this message of just giving a little bit back to the world and thinking about others during Christmas.”

NOËL – The Musical will make stops in Cedar Rapids (Paramount Theatre) on November 25, Ames (Stephen’s Auditorium) on November 29, and Davenport (Adler Theatre) on December 2. A documentary about the making of NOËL aired on Iowa Public Television in early October.