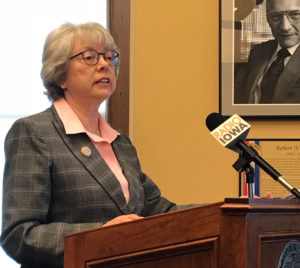 “That’s after paying $2.1 billion in benefits for the past fiscal year. Of that amount, $1.8 million was paid to Iowans,”Mueller says. “We currently have…110,000 retirees.”

In total, about 360,000 public employees who are retired or are still working are IPERS members.

“A misnomer — everyone thinks that it’s only state employees. No, state employees only make up 14 percent of the membership,” Mueller says. “Education continues to be over 50 percent.”

The other public employees invested in IPERS are city and county employees. IPERS was established in 1953 to provide pension payments to public employees in Iowa. Investments account for about 70 percent of the benefits paid out, according to Mueller. Actuaries calculate the net investment return in the past fiscal year was 7.97 percent.