You are here: Home / News / Beams going up on bridge over I-35 near Ames 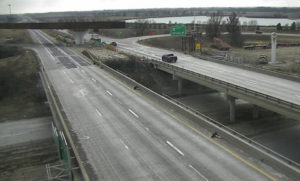 DOT camera view of beams from new I-35 flyover bridge.

Work continues on one of the largest and most expensive road construction projects in Iowa that was delayed by a contractor mistake.

What’s called a “flyover bridge” is being built where Interstate 35 meets U.S. Highway 30 on the east side of Ames. Iowa Department of Transportation engineer Scott Dockstader says they already had several nighttime shutdowns on the I-35 and work involving Highway 30 is next.

“We still have to do work over Highway 30 and connect up to the other abutment so we’ll have multiple U.S. 30 night closures and beam settings,” Dockstader says. The current clover-leaf interchange between U.S. 30 and I-35 in Ames will be retired once a new bridge is completed. Dockstader says the new bridge is expected to make thing safer for drivers.

“With this flyover we’re able to eliminate a lot of that merging/diverging movement, so in the future we won’t have people getting off at high speed trying to find a gap with that traffic merging onto the interstate from that loop,” according to Dockstader. Dockstader says the project appears to be on-pace for a mid-summer opening of the new flyover bridge.

The new bridge was supposed to be completed by the end of this year — but the work was delayed after it was discovered the Minnesota contractor made mistakes with the elevation of the piers and the anchor bolts that go into the piers weren’t positioned properly.