You are here: Home / News / Number of structurally deficient state-owned bridges is dropping 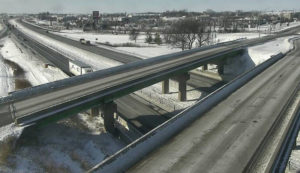 Overpasses in the Quad Cities via DOT camera.

The director of the Iowa Department of Transportation says in the past 11 years, the number of “structurally deficient” bridges on state-maintained highways in Iowa has been reduced by 80 percent.

“From 2006 to 2017, we’ve driven that number down from 256 to 51,” Iowa DOT director Mark Lowe told the governor yesterday during a budget hearing.

Lowe expects just 46 state-owned bridges to be classified as “structurally deficient” when the state budgeting year ends on June 30th.

“It just reflects a continued focus on bringing up the condition of the system, so of the 24,000 bridges in our state, 4000 are on our primary system. That means that less than one percent of the bridges on our primary system right now are structurally deficient,” Lowe said.

The Iowa DOT’s website has an “Iowa Bridge Condition Index” which indicates whether a state-maintained bridge is in good, fair or poor condition. The DOT notes that if a bridge is rated in good condition, that means it is “adequate for today’s traffic and vehicle loads.” Bridges rated in poor condition are “not unsafe,” according to the DOT, but should be considered for repair, replacement and additional monitoring or perhaps limits on the weight of vehicles that may travel over the bridge.

The vast majority of Iowa bridges — the 24,000 Lowe mentioned — are on highways, roads and streets maintained by cities and counties.