You are here: Home / Sports / Drake is all in for game at Iowa State 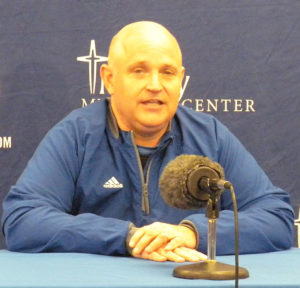 The Drake Bulldogs say they are all in for Saturday’s football game at Iowa State.

The Cyclones and Bulldogs will collide for the first time since 1985 after both teams had their season openers cancelled due to weather. Drake coach Rick Fox says they let the players decided if they wanted to accept the challenge.

“If our guys aren’t all in for this we should not go up and play the game”, said Fox. “After I had lunch with our captains last week I had a feeling which way it was going to go because they could hardly contain themselves.”

The Bulldogs are 7-3 after posting a 43-6 win at Moorhead State on November 17th and for seniors like defensive lineman Nathan Clayberg it is a chance to play another game in a career that he thought was over.

“We went through all the emotions of what that is like to have that end”, said Clayberg. “To not only find out we have another game but to have it be in a 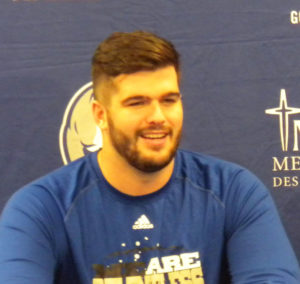 Big 12 stadium against a top 25 team that is about as much of a dream come true as you could possibly imagine.”

Saturday’s meeting is the 70th between the two programs with Drake owning 17 wins over the Cyclones. It will be Drake’s first contest against an NCAA Division Football Bowl Subdivision program since September. 20, 1997 at South Florida. Drake defeated the Bulls in that game, 23-22.