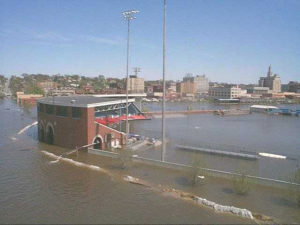 Federal officials want feedback on a plan to raise a Mississippi River levee that promises added protections for parts of far southeast Iowa, but it could mean increased flooding risk elsewhere.

Lee County officials want to raise the Green Bay Levee by one foot. Drainage District chair Mike Walker wants the permanent improvement, after relying on temporary fixes during the 2008 flood.

“There’s no way we could have sandbagged that many mile of river in the time that was required,” Walker says. “We just took bulldozers and pushed the back side of the levee up on to the top of the levee.”

The project would cost an estimated $10 million and would mean added protections for homes, farmland and the Iowa Fertilizer Company. In extreme cases, the project could mean worse flooding for Burlington and some communities in Illinois, but Walker says it’s worth protecting the Green Bay township.

“Between the grain elevators and the fertilizer plant and the livestock and the farm growing crops and all the improvements within the district,” Walker says, “it justifies.” The U.S. Army Corps of Engineers is taking public comments on the proposal through Friday.