You are here: Home / Fires/Accidents/Disasters / NTSB cites broken rail as cause of northwest Iowa train derailment 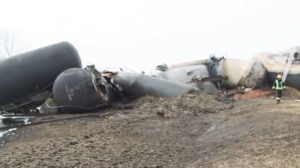 Federal investigators say a broken rail in the track was the probable cause of a fiery 2017 train derailment in northwest Iowa.

The board’s report listed another contributing factor: the continued use of tanker cars that have been flagged as “vulnerable” to releasing hazardous or flammable materials in an accident.

The train wreck destroyed a 152-foot-long railroad bridge and about 400 feet of track. No one was injured in the derailment.