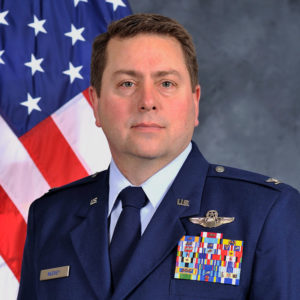 The Iowa National Guard says Sioux City native Colonel Mark Muckey has been selected as the next Wing Commander of the unit. Colonel Muckey says it’s a great opportunity to come home 30 years after he joined the 185th when he was in high school. Muckey joined the Iowa Guard at 17 while he was till going to Sioux City East High School and later was selected to go to pilot training. He went to college at Morningside and Iowa State.

Muckey flew the A-7 and eventually ended up in Oklahoma. He is a command pilot with more than four-thousand flying hours, primarily in the U.S. Air Force C-130 Hercules and K-C-135 Strato-Tanker. Colonel Muckey is currently the Air National Guard Advisor to the Air Mobility Command Inspector General in St. Louis where he helps oversee several units.

“All the wings that fall under the air mobility command, active guard and reserve. And I give them checkups and provide them feedback on their performance,” Muckey says. Colonel Muckey will overlap command duties in Sioux City with the current commander, Colonel Larry Christensen for a few months beginning in January, 2019.

Christensen is being promoted to brigadier general and has been selected as the Chief of Staff for the Iowa Air National Guard at Camp Dodge in Des Moines. That will mean some new duties for Christensen. “Probably one of the major things is to represent our adjutant general, Major General Tim Orr, in different aspects of the Iowa National Guard, whether that be air or army,” Christensen says. “To manage the staff down there at joint force headquarters. Working with not only the 185th, but also the 132nd, the wing down in Des Moines…but also the 133rd in Fort Dodge.”

He will assume his new position following a formal handoff of the Wing leadership to Colonel Muckey. A formal change of command ceremony will be planned for a later date.