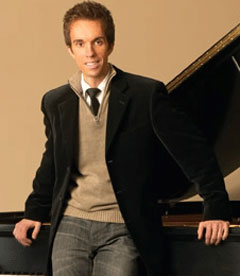 An eastern Iowa musician is back at the piano for a series of Christmas concerts over the next three weekends.

Jim McDonough, of Monticello, says audiences will be able to enjoy the sounds of the Christmas season, centered on the piano. “There’ll be a nine-foot concert grand on stage surrounded by lots of holiday cheer,” McDonough says. “We have a full stage set and I’ll be joined on stage by my 14-piece professional orchestra and we have a cast of nine singers and dancers, fully costumed and choreographed.”

He says his shows offer a wide variety of music, all focused on the holidays. “Folks who are familiar with my music as being solo piano will be satisfied, they’ll get a taste of that,” McDonough says. “We also have big production numbers that involve the entire orchestra and cast. The show is filled with everyone’s favorite Christmas songs.” McDonough has released 18 CDs of music through the years with a new one coming out in 2019.

Proceeds from his Holiday Grande concerts will benefit a haven for people with various disabilities: Camp Courageous, located near Monticello in rural Jones County. “They will serve about 8,000 individuals with year-round programming,” he says. “They do it without government sponsorship. There are no paid fundraisers. It’s all done by donations.”

McDonough launched his Iowa tour last weekend with shows in DeWitt, Cedar Falls and Coralville. The upcoming concerts are scheduled for Saturday night in Anamosa and Sunday afternoon in Monticello. Other concerts will be in Dubuque on December 8th, Cedar Rapids on December 9th, Ottumwa on December 15th and Des Moines on December 16th.

This is McDonough’s 16 year of touring. For ticket information, visit: www.pianofavorites.com