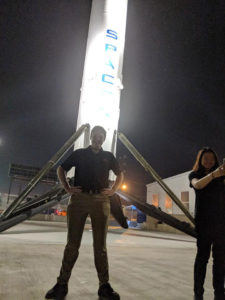 A University of Iowa student will be among a select group of VIPs at Florida’s Kennedy Space Center for next week’s rocket launch.

Zachary Luppen, a U-I senior and Fort Dodge native, was among just 40 people picked to witness the Falcon 9 lift-off out of 64,000 applicants. Luppen says NASA wants people who can crow about the launch on social media and the U-I’s platforms reach several hundred-thousand followers.

“The university has a Snapchat, a Facebook and a Twitter. I will be accessing all of those social media sites along with several others to promote this event,” Luppen says. “At the time of the rocket launch, I’ll be doing what’s called a Snapchat Takeover. Essentially, I take over the university’s Snapchat and provide live footage of the rocket launching out at Kennedy.”

The U-I Astronomy and Physics major will leave for the NASA complex on Florida’s Space Coast on Saturday for what’s turned out -not- to be an all-expenses-paid trip. “They’re providing the VIP pass along with a behind-the-scenes tour and a few extra things added in,” Luppen says. “I do have to pay out-of-pocket for the flight and the AirB&B. My mom has agreed to fund it for me as an early Christmas present.”

The launch of the commercial SpaceX Falcon 9 rocket is scheduled for Tuesday. It’ll be carrying a payload and scientific equipment to the International Space Station.  NASA is calling this a “historic” launch and Luppen explains why. “This is one of the first launches of the Block 5 set of Falcon 9s,” Luppen says. “Block 5 is the brand new set of Falcon 9 rockets that are supposed to be reusable up to ten times which is just unimaginable for rockets that we’ve had over the past 50, 60 years.” Luppen did an internship this past summer at NASA’s Jet Propulsion Laboratory in California and had two chances to see rocket launches, but neither panned out. He says he’s looking forward to “having a blast” in Florida next week.

It’s a very busy time for Luppen, with finals approaching and his graduation from the U-I on December 15th. “I’m planning to go to graduate school in the fall which will be about six more years of education,” Luppen says. “In the spring, I will be working in the Physics and Astronomy Department on two of our upcoming missions to Jupiter. We’ve been involved with those missions for the past couple of years now and we’ll be shipping off the flight version of one of those missions in the spring.”

Follow Luppen’s exploits at next week’s launch as he chronicles the mission on Snapchat by searching “uiowa.”