You are here: Home / Sports / Drake gives Iowa State all they can handle before falling 27-24 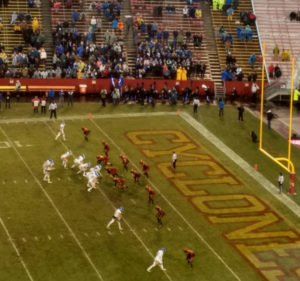 Drake moving in for a score against Iowa State.

The Drake football team nearly pulled off an all-time upset Saturday against Iowa State in a soggy-snowy Jack Trice Stadium before falling 27-24.

No one thought the Bulldogs would keep it close with the Cyclones, but Drake coach Rick Fox says he pushed his team to forget that.

“Sometimes people outside of our program define us because we’re non-scholarship. And they make assumptions about the kind of men and kinds of athletes that we have. Honestly, I challenge out guys, because sometimes they buy into that lie,” Fox says. 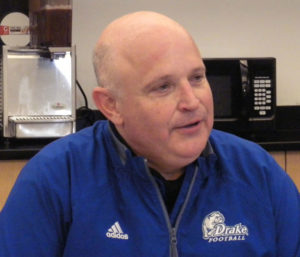 the kind of character that we have — and I couldn’t be more proud of these guys and our entire football team,” Fox says.

Senior Drake defensive lineman Nathan Clayberg says he never doubted they stay in the game with Iowa State. “I think that moment for me has been true 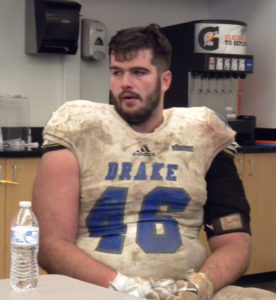 The game came about after both teams had their season openers canceled by storms. Drake finishes the season at 7-4.