You are here: Home / News / 2018 Iowa election results certified; one result could be challenged 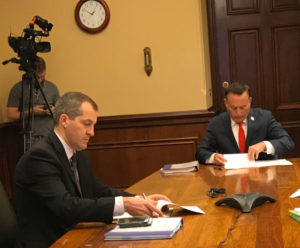 Iowa Ag Secretary Mike Naig and Secretary of State Paul Pate at the Executive Council meeting to certify the vote.

The statewide results of the 2018 election have been certified, with a 403-person “winners’ list” being approved today by three members of the state executive council. But there could still be a procedural challenge in one northeast Iowa legislative race.

Kayla Koether of Decorah, the Democrat who sought a recount in her race against Republican Representative Michael Bergen of Dorchester, has until Christmas Day to decide her next step. She could file an appeal to the Iowa House of Representatives, asking lawmakers to order that uncounted absentee ballots be counted. Koether finished nine votes behind Bergen, with 29 absentee ballots received the day after the election uncounted because the ballots did not have a postmark.

A judge ruled early today that the Winneshiek County Auditor should check the bar code on those ballots, to determine if they were mailed by the deadline on Monday, November 5. If Koether files an appeal to lawmakers, asking for that batch of absentee ballots to be counted, attorneys from the Iowa Attorney General’s office say it would be the first time in state history a candidate has made such a request.

Matt Gannon, another lawyer from the Iowa Attorney General’s office who was at this morning’s executive council meeting, added: “Certainly not in my lifetime.”