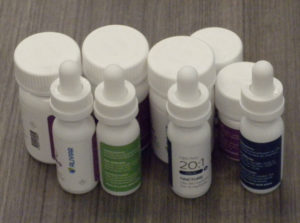 Dispensaries opened in Iowa Saturday to sell medical marijuana products in the state for the first time.

Patients with approved medical conditions were able to buy the products from five dispensaries in the state. William Rose and his 13-year-old son Christian made one of the first purchases in Sioux City. They choose tinctures or drops that go under the tongue.

William says they’ve had a registration card to get a similar product in Colorado for Christian’s seizures. He says the drops have helped. “It stopped them. Entirely. As far as we know. And he’s off that seizure medicine. They helped control his seizures, but it was not good for his body,” Rose says. Rose says now his family doesn’t need to drive to Colorado every three months to get medical marijuana for his son.

Medical marijuana is still federally illegal, and Rose says it was scary crossing state lines with it. “We had to get out a stack of cash, cross through Nebraska and supposedly we’d be okay with our card as long as we followed Iowa’s law,” Rose says. “It’s still federally illegal to be crossing state lines and, you know, for a kid. It was kind of terrifying.”

Stephen Wilson manages MedPharm’s dispensaries in Sioux City and Windsor Heights. He says he suspects there’s a lot of anxiety among physicians in western Iowa to certify patients for medical marijuana. “We understand that but it’s important for them to know that they aren’t prescribing medical cannabis. All they’re doing is certifying that they have a qualifying condition.,” Wilson says.

Some of those qualifying conditions include cancer, untreatable pain and seizures. In order for people to apply for the program, they have to be certified by a physician. Then, they need to get a registration card from the state to be able to purchase medical cannabis like capsules, creams and oils. Nearly 1,500 patients and caregivers across Iowa have state-approved cards that allow them to purchase products at one of five dispensaries.