You are here: Home / News / November drier than normal despite late snowstorm 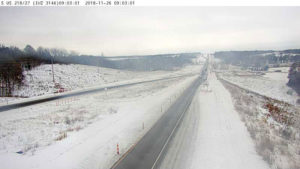 The dry fall weather farmers were looking for finally came in November — much later than they’d hoped.

State Climatologist Justin Glisan tracked the numbers for November. “Our statewide precipitation averaged around one-point-six-two inches — which is about four-point-three inches below normal,” Glisan says. “We typically see about two inches of precipitation during November.”

The below-normal November came on the heels of the seventh wettest October on record that was about two-inches above normal for precipitation — and the third wettest September — which saw statewide average rainfall about four-and-a-half inches above normal.

Glisan says a late winter storm on the 25th and 26th of November boosted the total a little. “And that brought heavy snowfall, blizzard conditions. We had wind gusts up to 45 miles-an-hour. Osceola reported the month’s highest snowfall total, almost a foot of snow,” according to Glisan. It was the coolest November since 2014 with the temperature six degrees below normal.

With Christmas now about three weeks away Glisan says it has an early indication of the day will be white or not. “What we’re seeing right now in the outlooks is above average temperatures for Christmas — and then below average chances for precipitation. So, as of right now it looks like a white Christmas might not occur,” Glisan says.