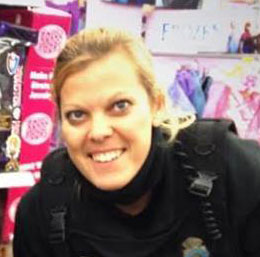 A southwest Iowa woman who was shot and killed more than three years ago while on duty as an Omaha police officer is being remembered in an unusual way.

“Three years and our memories are still strong and our respect is still strong,” the chief says. “The memory of Officer Orozco will always resonate in our community.” Orozco was fatally shot while attempting to serve an arrest warrant on a suspect in May of 2015. The man was also killed.

Orozco was 29 years old and lived in Council Bluffs. She was a native of Walnut, Iowa. Schmaderer says the horse was donated to the department by Orozco’s husband, Hector. “He’s carried himself amazingly well in the aftermath of the most tragic of incidents,” Schmaderer says. “He’s still a part of our family and always will be, as will their daughter.”

That daughter, Olivia, was born premature a few months before the shooting — and she was due to come home from the hospital the day after her mother was killed. Hector Orozco said he could no longer care for the horse as taking care of Olivia is his top priority. Sergeant Joe Svacina says the nine-year-old horse has undergone a year of extensive training and entered service last week.

“We had to bring that horse up, he’d been really sheltered as a hobby horse, and we had to bring him into the middle of the city,” Svacina says. “Some horses just can’t do that and we put a lot of time into making him a good police horse.”

Officer Orozco was the first female police officer to die in the line of duty in Omaha history.

(Karla James contributed to this report.)