You are here: Home / News / Under limited conditions, GOP could raise state sales tax in 2019 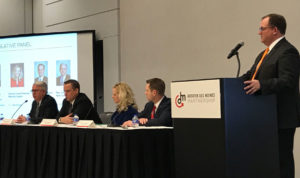 Two key Republicans in the Iowa Legislature say they’re willing to consider a hike in the state sales tax, if it’s coupled with cuts in other state taxes.

Iowa voters in 2010 approved creation of a state fund to pay for water improvement and outdoor recreation projects, but the legislature has never passed the 3/8ths cent increase in the state sales tax to fill the Iowa Water and Land Legacy Fund. Senate President Charles Schneider, a Republican from West Des Moines, today said he’s willing to “keep an open mind” as he discusses the idea with his GOP colleagues.

“I’m open to it,” Schneider said. “That’s all I’ll say on it at this point…We’ll see what everyone else has to say and we’ll see what happens to it during the upcoming session.”

Republicans in the Senate and the House will meet privately later this month to map out their policy agenda for the 2019 legislative session. House Majority Leader Chris Hagenow today said raising the sales tax for Iowa Water and Land Legacy initiatives will be discussed.

“Yeah, I’m open to it,” Hagenow told reporters this afternoon.

Schneider indicated raising the sales tax would be part of a broader discussion of tax policy.

Schneider was not ready to discuss with reporters what other “quality of life” initiatives might be financed with a sales tax increase. Hagenow told reporters Republicans will be “much more likely” to raise the sales tax if it’s coupled with a tax cut of some sort.

“One of the things that we’re always going to keep in mind is what is Iowans’ tax burden overall,” Hagenow said. “And we’re going to be cognizant of that, whatever we do, because we want at the end of the day Iowans to have a lower tax burden and not a higher one.”

Hagenow and Schneider made their comments after a legislative forum sponsored by the Des Moines Partnership, a coalition of 24 central Iowa chambers of commerce. The group supports a regional “water trails” project that could be financed with sales tax revenue in the Iowa Water and Land Legacy Fund, if legislators approve the sales tax increase.

Iowa purchases are generally assessed a seven percent sales tax rate, with one percent being used exclusively on school infrastructure and many cities and counties collecting a one percent local option sales tax.