You are here: Home / Fires/Accidents/Disasters / Snowy, icy weather poses a fall risk on sidewalks and steps 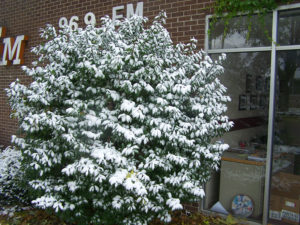 Snow on a tree in Le Mars.

The official start of winter is still a couple of weeks off but Iowans are already slipping and sliding on ice and snow-covered sidewalks, steps and roadways.

“Some of the local coops have what’s called chicken grit that you can put down, too, that gives you a little bit more prepared surface so it’s not so slick,” Richter says. “A lot of elderly folks can’t get out and spread it themselves, so if they’ve got a local neighbor or friend that can come over and spread it.”

Chicken grit is sharp, crushed stone, typically used by birds to help grind up seeds. To help keep your footing, ice and snow grips that go over boots and shoes are available at stores statewide, as well. Richter says we all need to remember to take our time when headed out into the slick elements on foot.

“Slow down and don’t hurry and don’t try to carry a whole bunch of things with you,” she says. “Maybe make a couple of trips because the faster you go, the easier it is to slip and fall.” The Bureau of Labor Statistics reports 42-thousand-480 workplace injuries involving ice, sleet or snow occured in 2014.