You are here: Home / News / Wet fall washes away drought in all parts of Iowa 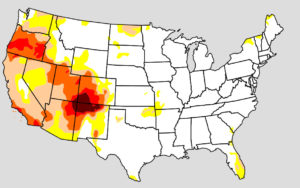 Iowa is clear on the national drought map.

The soggy weather in recent months frustrated many farmers who were delayed in harvesting crops, but Iowa’s wettest fall since 1941 has pulled the entire state out of drought conditions for the first time since May of last year.

Tim Hall, coordinator of hydrology resources for the Iowa DNR, says the key to becoming drought-free was southeast Iowa getting plenty of precipitation.

“And (that area) has gotten a lot of precipitation over a long period of time, which is really what it takes to get us out of a sustained drought like we’ve been in,” Hall explained. The final remnants of drought in Iowa were erased in November.

The Iowa drought map in September.

“In addition to the drought designation being removed, all of our shallow aquifers across the state appear to be in really good shape going into the winter,” Hall said. “That means we should have adequate groundwater supplies going into the spring months and we’re very encouraged by that because it’s been some time since we’ve felt comfortable with that.”

Iowa’s rainfall total for September, October, and November was about six inches above normal.