You are here: Home / Sports / Morningside heads to Florida for NAIA title game 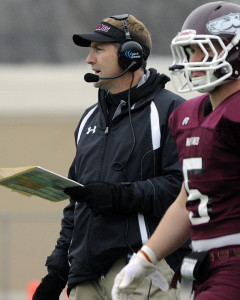 The Morningside football team leaves Tuesday for Daytona Beach, Florida and Saturday’s NAIA Championship against Benedictine of Kansas. Mustang coach Steve Ryan wants his team to enjoy all the activities scheduled this week while remaining focused on the game.

“And by and large I believe they understand that”, said Ryan. “They have worked hard to get to this point and they know how important it is. The other issue is just it is a national championship game in Daytona Beach so there are natural distractions that go with it.”

After playing several games in foul weather, including heavy snow in a semifinal round victory over Saint Francis of Indiana, the forecast for temperatures in the 60s and 70s is a welcomed change.

“I think that is going to be a lot of fun”, added Ryan. “We have had our fill of snow and we are ready for some sunshine.”

Morningside will try to become the first Iowa team to win a small college national title since Grand View claimed the 2013 NAIA Championship.