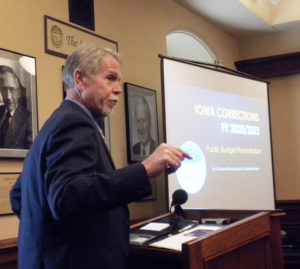 The head of the Iowa Department of Corrections announced Monday that he will retire at the end of December.

Bartruff laid out some of the issues he says they’ve faced. “We’ve had attacks on staff. We’ve had attacks on other incarcerated persons. We’ve had contraband in our facilities, we’ve had people on parole who absconded and committed another crime, and a rising prison population,” Bartruff says. “We know that part of the nature of corrections in managing and dealing with these situations. We are starting to see some good trends.”

Bartruff says one of the positives is a drop in attacks by prisoners. “If you look at FY ’16 there are over 140 incidents of either staff having a substance thrown at them, a serious injury. The trend has dropped the last three years — so as you can see in F-Y ’18 there are only eight serious assaults on staff,” Bartruff says. He the serious assaults mostly occurred at the State Penitentiary where the worst prisoners are housed.

Bartruff says they are working to address the increase in prisoners who commit another crime once they get out. “We think that there are some reasons for that,” Bartruff says, “we are releasing higher risk people at a higher rate. We focused our resources on making sure that we have the right number of people to supervise, but we don’t always have the right number to treat.”

The union that represents the corrections officers says the staffing levels are too low. Bartruff was asked if keeping a status quo budget continues that situation. “I understand that way of looking at it. But last year we went through a staffing survey with all of our corrections officers — what’s our minimum staffing numbers that we need. And with the money that we go last year we are able to get to those numbers,” Bartruff says. “So, we think that it’s not additional staff — it’s staff being more proficient in some of the core corrections practices.”

He says providing enough treatment isn’t the only answer. “It’s also making sure that we don’t keep people locked up any more longer than necessary. There is some data that suggests the longer you keep people in prison without reintegrating them into the community — the likelihood of them recidivating increases. So its’ a myriad of factors,” Bartruff says. The Corrections Department Budget last year was roughly 450-million dollars.

There are 7,739 men in prison and 730 women. The number of men went up by 100 in the last fiscal year, while the number of women dropped by nine.