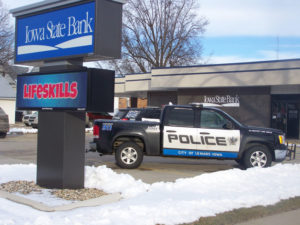 Le Mars police say a branch of Iowa State Bank was robbed in that northwest Iowa community on Wednesday afternoon.

Police Chief Kevin Vande Vegte says two suspects, a man and woman, fled the scene in a U-Haul truck, which was intercepted soon after the hold-up. “A Plymouth County deputy located the suspect vehicle a short time later and tried to initiate a traffic stop on the vehicle and the vehicle did fail to stop,” Vande Vegte says. “A pursuit of that vehicle did continue into Plymouth County.”

Law enforcement officers from several departments worked together to bring the fleeing truck to a halt. “Stop sticks were successfully deployed causing all four tires on the U-Haul truck to deflate,” Vande Vegte says. “The vehicle was forced off the roadway and the pursuit ended with no injuries.”

The chief was not able to confirm whether a weapon was used during the hold-up, but he says a weapon was mentioned in the robbery. An undisclosed amount of money was seized from the vehicle. The names of the man and woman who were taken into custody weren’t released. Vande Vegte says they’re not from the Le Mars area.