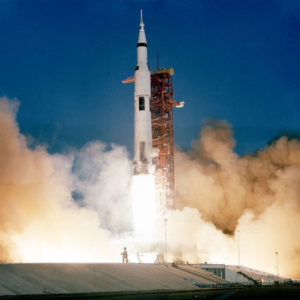 The pioneering work done in the 1960s by employees of what was then Collins Radio in Cedar Rapids is the subject of a documentary premiering this week.

“Moon Talk” tells the story of the technology developed at Collins that enabled astronauts aboard the Apollo 8 Moon mission to speak with Mission Control. Retired systems engineer Steve Tyson says the company’s contributions were critical.

“Collins Radio had the complete responsibility for all of the communications, both between the Earth and the spacecraft, as well as around the Earth,” Tyson says. “We had to have stations scattered, about 35 sites around the world, to be able to create a link with the astronauts at all times.”

“I worked for Collins for 22 years and never realized the magnitude of the amount of work that went on and the magnitude of the contributions that these folks, Art Collins and these people, made back then,” Tyson says. A free showing of “Moon Talk” will be at the Collins Road Theatres in Marion Friday morning at 11:30.

Known for decades as Rockwell Collins, the company was purchased last month by UTC Aerospace Systems and is now known as Collins Aerospace. With about 9,000 workers, it’s Cedar Rapids’ largest employer.