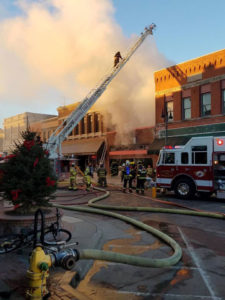 Fire destroyed a building in downtown Grinnell this morning.

Grinnell Fire Chief Dan Sicard says crews were called at 6 a.m. on the report of flames coming from the roof of the building, which housed a Mexican restaurant.

“The fire was in the roof and crawl space area,” Sicard said. “We kept it from expanding into any of the buildings next to it and after the collapse happened, we were able get inside and finish putting it out.”

The cause of the fire is under investigation. People in nearby apartments made it out safe and no one was seriously hurt.

“Everybody was evacuated from the apartments, we have one minor injury to a firefighter,” Sicard said. The Grinnell Fire Department was assisted by crews from Gilman, Kellogg, Searsboro, Malcolm, and Brooklyn.