Senator Jerry Behn of Boone, the committee’s Republican chairman, presided over the short, four-minute-long meeting. Behn said the alleged behavior happened before Boulton was elected to the senate and the committee has no jurisdiction over a private citizen.

“Regardless of the decision made today, neither the committee nor the Iowa Senate condone unwanted touching of one person by another,” Behn said. “We are committed to maintaining the integrity of the Iowa Senate at the highest level.”

Sharon Wegner is the woman who filed the complaint accusing Boulton of repeatedly grabbing her buttocks in a bar in 2015. Wegner told reporters after today’s meeting she understands, procedurally, why the committee ruled the way it did. 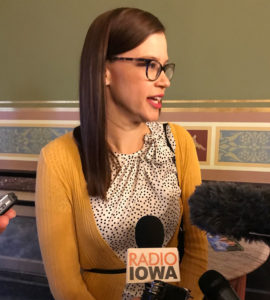 “I hope that moving forward folks realize that our ethics rules don’t hold our senators and elected officials accountable when they aren’t here on the capitol grounds,” she said.

The top Democrat in the Iowa Senate has released a statement, saying she still believes Boulton should resign from the senate. Boulton issued a written statement late this morning, making it clear he does not intend to resign. Senate Minority Leader Janet Petersen has not assigned Boulton to any committees for the 2019 legislative session and she commended Wegner for raising “compelling concerns about Boulton’s behavior.”

(This story was updated at 11:21 a.m. with additional information.)