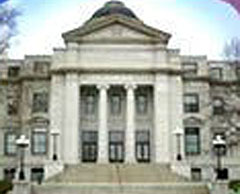 The State Ombudsman’s Office is in the Ola Babcock Miller Building.

Ombudsman Kristie Hirschman says the Iowa Public Information Board (IPIB) went into closed session twice to discuss the Burlington Police Department video of the fatal shooting of a woman. Hirschman says they didn’t take the proper action when they came out of the closed sessions. “Their decisions were not easily accessible to the people, to the citizens as required by law. They failed to specify what they voted on after emerging from the closed sessions on July 20th and August 25th of last year,” according to Hirschman.

Hirschman says she subpoenaed a copy of the recordings from the two closed meetings to determine whether the meetings were legally closed after an open-government advocate alleged they were not. The Ombudsman assured IPIB that it would keep the recordings confidential, but the board refused to provide the recordings. Hirschman says it is disappointing the board refuses to answer the questions about the meetings. “We feel that their approach to all of this goes against everything that they stand for — which is transparency and accountability,” Hirschman says.

The Ombudsman’s report recommended that IPIB admit fault for the missteps — but Hirschman says just one of the 7 board members, Rick Morain, agreed with the recommendation.

The chair of the IPIB, Mary Ungs, issued a letter in response to the Ombudsman’s report. She says the board’s closed meeting discussions fall under attorney client privilege and they should not be released. The letter says “In order to serve the public, the Board must feel free to discuss legal matters confidentially with legal counsel in a closed session expressly authorized by law. Consequently, the Board must reject its rights to wholly reject the findings, conclusions and recommendations contained in the report.”

Ombudsman Hirshman says her report is the final step for her office. “There is not particular process. We let the public sentiment control what happens from this point forward,” Hirschman says.

The executive director of the Iowa Freedom of Information Council, Randy Evans, issued a statement calling the Ombudsman’s report “a stinging rebuke of the board whose sole mission is to educate government officials and the public about these two important laws and to enforce the laws when violations occur.”

Evans’ statement concludes by saying, “We hope the ombudsman’s report will help members of the Iowa Public Information Board understand more clearly how they should be operating to carry out their mission, because if this board does not understand that, there is little hope other government entities in our state will live up to the spirit of openness that needs to guide them in their work.”