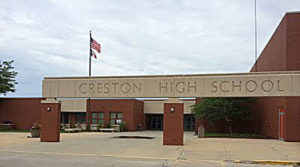 A school district in southwest Iowa is being awarded a half-million dollar federal grant for security upgrades through the STOP School Violence Act.

Steve McDermott, superintendent of the Creston Community School District, says the $500,000 will go a very long way in the district, which has an early childhood center, an elementary, a middle and a high school.

McDermott says, “We have a lot of money invested already in our safety and security but this will really round out and really advance what we’re doing in terms of tightening up security.”

The grant includes funding for a shooter alert system, advanced technology which uses sensors which detect if a firearm has been discharged.

“A lot of times you’ll hear where they have an incident or a tragedy where people heard noises but they thought it was firecrackers or some other noise,” McDermott says. “This actually, from air pressure, can determine if a gun goes off and then it sends automatic messages to local law enforcement.”

“We won’t set those up at a specific door permanently. We’ll move those,” McDermott says. “They’ll be at one door one day and possibly at another door another. We also hope to set those up at football games in the fall.”