You are here: Home / Outdoors / Slater will be first city to use new algae wastewater treatment system 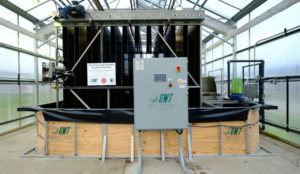 The module that holds the biofilm.

The central Iowa town of Slater will be the first city in the state to try a new wastewater treatment process that uses algae to remove ammonia as well as other nutrients.

The technology was created not far from Slater at the Ames-based Gross-Wen Technologies. Max Gangestad is the company’s spokesperson. “It’s called the revolving agale biofilm…typical algae grows in suspended liquid, think about the algae growing in a lake, it mixes in the lake. Our system grows on what’s called a biofilm,” Gangestad says.

That biofilm is dropped into the wastewater. “It’s a rotating belt that goes down into the water and spends most of its time out of the water. So it is able to grow more algae and it’s able to grow at a lower moisture content and it just makes the efficiencies of the system a lot better,” according to Gangestad. He says the nitrogen in the wastewater is naturally removed. 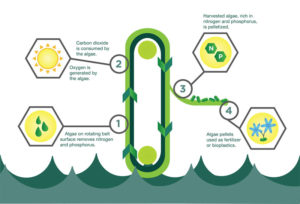 “We take the algae out of the wastewater treatment plant and we palletized it and we sell it as a slow-release fertilizer,” Gangestad says. He says his company pays the city for the algae.

“Small town Iowa folks don’t want to be algae peddlers — so we will have an offtake agreement with the city and we will purchase that algae from them and we will produce the algae biproduct,” Gangestad says. Gangestad says the algae takes more of the materials out of the wasewater and makes it cleaner. The program has been in the testing stages and this agreement moves it forward.

He says they have numerous pilot projects across Iowa and in the city of Chicago and this will be the first system put in place to meet permit requirements.

Gangestad says they are hoping the Slater operation will lead to more cities giving their system a try.

Gangestad says the system will cost the city about $4 million to install. He says that’s about $2 million less than the traditional systems. The system should be installed and ready to use by mid 2020.