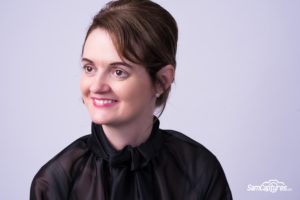 A prison is not a typical tour stop for a comedian, but Laura J. Steele – known by her stage name “Muffy” – is hoping to induce a few laughs today from the roughly 600 inmates at the Iowa Correctional Institution for Women in Mitchellville.

Steele says she’s bringing more than jokes to the facility located 25 miles east of Des Moines. “And that is hope,” Steele said. “You know, people care about them on the outside and they have hope they can change their lives – anyone can change their lives. I am absolutely coming with a purpose.”

The 48-year-old Steele now lives in New Jersey but grew up in Colorado and Minnesota where both of her parents worked in prisons as psychologists. “I grew up in corrections, as a child, so I’m very comfortable in that environment. I think that’s unique for a comedian,” Steele said. As an infant, Steele was given the nickname “Muffy” by her mother.

The comedian Muffy has performed in some of the industry’s premiere venues – including Dangerfield’s Comedy Club, the Broadway Comedy Club, and Comic Strip Live – all in New York. But Steele is “proudest” of landing this gig at a prison in Iowa. “I really believe in giving back and serving others,” Steele said. “I really am most excited and proud of being able to perform in the women’s prison.”

Muffy will deliver three one-hour performances today at 1:30 p.m., 4:30 p.m. and 6:00 p.m. She is not being paid. Steele said this will be the first time she’s performed inside a prison, but hopes it won’t be the last.

Steele contacted Cheryl Dahm, the warden of the Iowa Correctional Institution for Women, after hearing about the Mitchellville facility in a National Public Radio broadcast. Dahm agreed to book Muffy’s “clean comedy” act. Steele said the performance she’s planned is based on her book, “26 Life Lessons: Advice For Today’s Youth and Adults.” Steele said she’ll be giving each incarcerated person a copy of her book following her performances.

Muffy talks about one of her favorite comedians – the late Richard Pryor: